THE WORD ‘DUMB’ SPRINGS TO MIND

I’ve always admired this Auto Electrical workshop at 3 West St. South Hurstville. And every time I drove by recently I was almost expecting the worst (some of you heritage die-hards would know the feeling)… So I cringe to think who could go out of their way to try and ‘modernize’ such a classic and unique piece of Australian automobilia heritage, just as this type of genre is coming back into rage.

I ignorantly assumed the building was locally-listed (or it would have been gone already by now), but have since been informed otherwise by Kogarah council. So I guess I should be thankful it still holds its place at the top of the hill… However it confuses and astounds me that the owners would choose to remove the fixed awnings, the workshop doors, the advertising signs and street lettering, and alter the colours to some ugly non-relatable paint scheme – almost everything that made it an automotive workshop in the first place is gone.

Now instead it looks like some disused army barracks trying hopelessly to resemble a modern office space. What a total failure on two counts – the obvious and clear willful neglect of heritage attributes, and the badly attempted rebirth imitation of a building into something it is clearly not.

More on the mark would’ve been an outcome that reflected the original features of the workshop. A café would work, a showroom of sorts, retail, (an auto electrician would you believe?), anything really that pays homage to the structure and heritage of the site. It’s a simple recipe that we fail to abide by time and time again. Normally the excuse is the overruling ‘need’ for highrise but that is not the case here, this is just plain dumb.

Again we have failed to give a rare heritage asset the protection it deserves. In effect an example illustrating in vivid red why we need heritage listings and rules to abide by regarding the presentation of heritage buildings. Instead we have a classic and rare shopfront that has been unceremoniously bastardized and probably won’t exist for much longer in any case. And a couple of key adjectives that go some way to describe this kind of behaviour – the words ‘dumb’ and ‘dumber’ spring to mind… 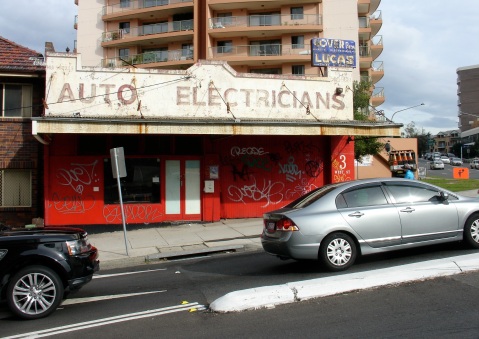 2 responses to “THE WORD ‘DUMB’ SPRINGS TO MIND”