Is this an ugly, unloved building? The SMH thinks so in its article of late last year after plans were outlined to redevelop the 1964 built Ryde Civic Centre with twin towers more than three times the height of the existing structure. I personally have driven past this building on many occasions, and always marveled through my foggy car window (foggy from the haze of constant traffic along Lane Cove Rd.) at its retro form, simple yet elegant lines and concave glass filled facade, reminiscent of the AMP Buildings at Circular Quay, the first skyscrapers of Sydney. Perhaps its the 1960s modernity of the design I admire, or the sheer smart municipal feel of it all. Perhaps part of what I find easy on the eye is the seemingly appropriate and sympathetic scale of the building to the surrounding streetscape, which is more than can be said for its planned replacements, two World Trade Centre-like monstrous tower blocks of 24 storeys each, accompanied by smaller podium buildings, for a total of 500 units, 600 car spaces, and a whole lot of extra congestion added to this already choking stretch of main arterial road.

What makes the plan even more shadowy is that motor transport will be the only mode of transport available to the inhabitants of these new skyscrapers, as there is no railway station nearby at all, a factor that would normally veto such a densely packed development in the first place. And as for open space, good luck trying to find that in the area. The road it fronts is the second busiest in the city of Sydney.

So who is the culprit, trying to rezone this parcel of public land and the raise the level of building heights up to the sky and pack in ever more rate-paying residents to this overcrowded precinct? It’s Ryde Council… Well, not all of Ryde Council to be fair, they have been deadlocked 6 votes to 6 in an intriguing and divisive battle between the anti-redevelopment faction, who seem to be representing the views of 99 percent of the constituents, and the pro-redevelopment, who are more interested in blocking the views. The Mayor, Artin Etmekdjian has used his casting vote on more than one occasion, quite controversially, to pass the motion of redevelopment, when he should in fact, in a matter of deadlock, use his casting vote to maintain the status quo.

From an outsider’s perspective, the deal is a crafty one. Ryde council hands over 60 percent of the land to Lend Lease at ‘market rate’ together with a loan of a reported 35 million dollars to help finance the development. In return, council changes the zoning of the land and throws the height controls out the window thereby increasing its assets from $18 million to $79 million. So, I guess the only real losers are the residents of Ryde and people of greater Sydney. Indeed, why wouldn’t any council go ahead and follow suite knocking down their own council chambers to build highly lucrative residential skyscrapers in their place?

And it gets uglier… The council appears to be on the verge of collapse, with members walking out of meetings, tensions boiling over, erupting in the extraordinary motion to sack the general manager of Ryde Council John Neish by the anti-redevelopment camp, in a move to hold over negotiations until after September’s local elections, when they feel they would have the numbers to scrap the land deal with Lend Lease, and pursue other more community-acceptable avenues. And so it should be; the elections are now so close and this is a very big issue for Ryde residents and anyone who uses Lane Cove Road/Devlin St. for commuting. 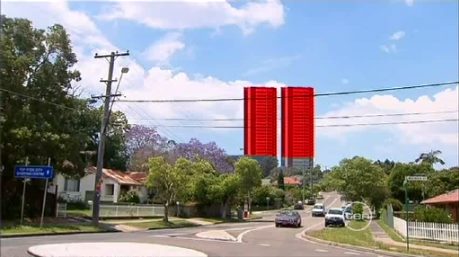 Residents are clearly not happy, as this can be seen to be a massive overdevelopment which lacks the rail transport infrastructure needed. More than 2000 letters of objection were written regarding the proposal. Labor Cr Jeff Salvestro-Martin said “The community is a very important stake holder in this whole process, and until now they’ve effectively being ignored. When you think that this is actually a civic centre… you would think the community is a very important stakeholder in that. We need strong leadership, someone to stand up and say, you know what, we actually haven’t got this right. We need to go back to the drawing board, re-examine this proposal right from the start.” Recently the anti-redevelopment faction have put forward a motion to establish a community advisory committee consisting of four sitting councilors and members of the public.

Hats off to the six councilors who haven’t bowed down. We can only hope that come election time things will change for the better in Ryde. People have had a gut full of this, seeing their suburbs turned into high density concrete blocks for the profits of multinational developers and self indulgent councilors. Developments like this change our city forever, and they are becoming far too commonplace in cities like Sydney in this day and age. This is one instance where acting with your vote may produce a more favorable outcome for the community. Unfortunately the fate of the wonderfully modernist Civic Centre is probably to become rubble no matter which way it goes at the election, as the anti-Lend Lease development camp haven’t pursued an Interim Heritage Order option even at this desperate stage. So Ryde will end up losing its landmark Civic Centre and gaining new towers either way, its just a question of size.

I for one don’t think its an ugly building at all, and would love to see the Ryde Civic Centre retained as a piece of 1960s urban engineering – from a time when our city was young, and what was important was how people lived, and how they interacted within their city, not how many you could fit into small concrete boxes rising unrealistically over the gentle surrounding suburban landscape. We need to conserve outstanding examples of this era of municipal building as much as any; together with other styles and genres of great architecture they knit together to form a rich tapestry of the building of our city over many generations, of the civic pride we once felt as a community, of what Australia really stands for. And that, stone by stone, is slowly being eroded from our common view.